The pandemic certainly hasn’t made the job of putting out a newspaper any easier, but I’m immensely proud of the work the crew here at Tucson Weekly has done over the last 18 months. Putting out this paper is a team effort and I feel blessed beyond measure to work with the people who bring you this rag every week.

Over the weekend, The Weekly brought home nine awards in the Arizona Newspaper Association’s Better Newspapers Contest, including three first-place awards. The Weekly competes against the largest non-daily papers in the state.

Finally, congratulations to Tucson Salvage columnist Brian Smith, who won third place in the best feature category for “Pandemic Day at Circle K” (April 2, 2020), which profiled the cast of characters outside a midtown Circle K in the early days of the COVID outbreak.

So what’s in our award-winning paper this week? We’ve got an excerpt from a new book from our friends at UA Press, Discovering Mars: A History of Observation and Exploration of the Red Planet. Authors William Sheehan and Jim Bell revisit the Phoenix Mars Lander, a NASA mission led by the University of Arizona.

Elsewhere in the book: Jeremy Duda of the nonprofit news site Arizona Mirror looks at former newscaster and current Republican powerhouse Kari Lake’s drive for next year’s gubernatorial nomination; contributor Colleen Forsyth looks at Rescue Me Marana’s efforts to find homes for stray animals; managing editor Jeff Gardner looks at a new book that examines Tucson’s history of murder and mayhem; movie critic Bob Grimm shares his intelligence about Daniel Craig’s final outing as James Bond; music contributor Christina Fuoco-Karasinski talks with former Spacehog vocalist Royston Langdon ahead of his gig opening for The Psychedelic Furs this weekend at the Rialto Theatre; Xavier Omar Otero tells you about the rest of this week’s concerts in XOXO; and there’s plenty more in our pages.

Speaking of awards: Next week, Best of Tucson hits the streets, so I gotta get back to work on that! Seeya then!

Best of Tucson 2021: Legends of the West

The Skinny: Choice Matters: The GOP candidates running for Senate next year want to end abortion in the United States

Editor's Note: A matter of pride 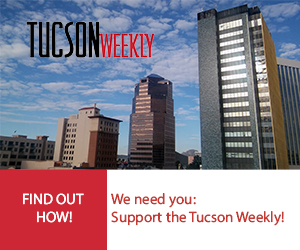